World Touring Car driver and British Touring Car Championship (BTCC) legend Gordon Shedden has joined battery manufacturer GS Yuasa as an ambassador for their GS brand. The partnership will see the triple BTCC champion support the battery brand in their continuous development to offer the highest quality & reliability available in the market.

The Scottish driver, nicknamed ‘Flash’ by fans, is synonymous with British motorsport having competed in the SEAT Cupra Championship, Porsche Carrera Cup Great Britain and the British Touring Car Championship, claiming three titles with the Yuasa-sponsored Team Dynamics outfit in 2012, 2015 and 2016. 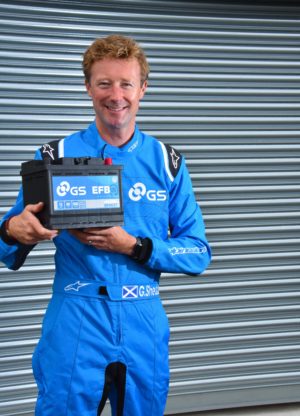 As part of the partnership, Gordon will be the face of GS battery by promoting and championing the brand for its renowned quality and reliability. Gordon will also feature in events and PR responsibilities whilst assisting the manufacturer with developments to new range launches and battery technology.

James Hylton, Managing Director of GS Battery Sales UK Ltd said: “We’re delighted to announce Gordon Shedden as a brand ambassador for GS. Gordon’s reputation for performance and dependability are qualities also found in the GS range, making the pairing an obvious one.”

“Gordon will become the face for the GS brand in the UK – he’s instantly recognisable for his incredible BTCC success and the perfect ambassador for the brand.”

Gordon, GS battery brand ambassador and triple BTCC champion, added: “It’s great to be involved with such a highly respected and globally trusted brand. Motorsport is all about technology, high performance, a vision to succeed and to be the very best. Therefore, to partner with a global brand like GS Battery who share exactly the same values is a privilege. A trusted partnership is always a winning combination!”

Manufactured by GS Yuasa, GS is the leading automotive battery brand in Asia and many other parts of the world. Renowned for their superior performance and excellent value, the GS automotive range is designed to meet the ever-demanding needs of modern vehicles. Established in 1895, GS’ outstanding reliability and power has been perfected for over a century of battery development.